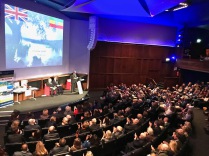 On 2nd October some 20 of the epic expedition that made the first descent of the legendary and little known Blue Nile in Ethiopia, attended a presentation at the Royal Geographical Society with over 550 guests and members of the public. TRH The Duke and Duchess of Gloucester were guests of honour.

Colonel John Blashford-Snell, Major Roger Chapman and Richard Snailham were introduced by Neil Laughton, Chairman of the Scientific Exploration Society and gave a 70 minute presentation, illustrated with slides and film from the 1968 expedition.

The mile-deep Blue Nile Gorge had been said to be the last unexplored area of Africa and the audience enjoyed a riveting description of the challenges and hazards that faced the team.

Under the patronage of His Imperial Majesty, Haile Selassie Emperor of Ethiopia, the Army backed expedition pioneered the use of inflatable boats that led to the pursuit of white water rafting, produced over 70 scientific papers and led to the founding of the Scientific Exploration Society in 1969.

Strongly supported by the Daily Telegraph and many commercial sponsors including EP Barrus Ltd, the expedition was followed by an official book ‘The Blue Nile Revealed’ by Richard Snailham and a TV film by Survival Anglia Ltd.

The proceeds from the anniversary event were donated to the Cure Paediatric Orthopaedic Hospital for disabled children in Addis Ababa and the Scientific Exploration Society.

John Blashford-Snell and Richard Snailham continue to tell the story of this great expedition in lectures in Britain and overseas.