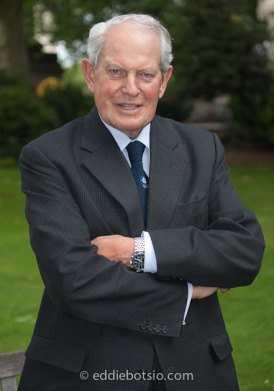 John is available to give presentations or after dinner speeches. These can be illustrated with slides or video, or JBS will speak without any visual aids, as​ appropriate.  The talk can be of any length tailored to the requirements of the client.

See below for examples of presentations.

The year 2020 was the 50th anniversary of the production of the Range Rover. The first major test of this remarkable car was the epic British Trans-Americas Expedition.

The aim was to focus attention on the need to complete the Pan-American Highway, at 17000miles, the longest road in the world.  The cars were to make the first crossing of the complete 200 mile Darien Gap and the fathomless Atrato swamp, that separated the Americas.  At the same time important scientific studies were to be made in the Gap and ways of protecting its rain forest and indigenous people.

The expedition with over 100 servicemen (including a team of Royal Engineers) from Britain, Colombia, Panama and the United States, included scientists and specialists and four women.  They used Army aircraft, small tracked carriers, an old Landrover, twenty eight horses and their feet to survey a route through the dense jungle, swamps and hills of Darien.  The venture was supported by the Scientific Exploration Society, The Royal Automobile Club and many companies.

Led by the Explorer John Blashford-Snell, then a Major in the Royal Engineers, the expedition took over six months to travel from the snows of Alaska to the wind swept wilderness of Patagonia.  Over half the team became ill at some point and their battles with the challenging terrain, the insects, the snakes, the mechanical difficulties, plus attacks by revolutionaries in Colombia, and the tragic drowning of some Colombian marines supporting the team, made this one of the epic expeditions of the 20th century.

However against all odds the project succeeded – several TV films were made in Britain and North America.  The best selling author Russell Braddon wrote the official book “The Hundred Days of Darien” and eventually the Pan American Highway followed the explorers route until political pressures stopped it short of the Panama/Colombian border.

JBS has prepared a fascinating lecture telling the story of this incredible venture, to appeal to audiences of all ages and especially Range Rover enthusiasts.  For more details please visit the Public Speaking page.

Commenting on the saga John said “It was the toughest expedition I’ve done and a very close run thing”. 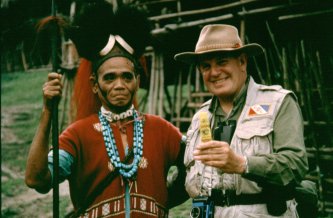 John has designed a brand new lecture entitled In Elephants’ Footsteps, it describes his adventures and experiences whilst working with elephants in Asia and Africa and seeking to protect them.  It has some exciting images and film clips.

The Illustrated presentation describes JBS's work with young people (17-24) on the circumnavigational voyages of Operations Drake and Raleigh 1978 – 1991 with the patronage of HRH The Prince of Wales. The aim was to develop leadership under challenging conditions, whilst performing scientific work and giving aid to remote communities.

With dramatic slides and video clips, JBS describes meetings with wild beasts including the giant elephants of Bardia, Nepal and tiger, lion, crocodile and gorilla.

JBS tells of his 2010 project assisting the Wai Wai tribe in a remote part of Southern Guyana.

The story of the search for the pre Panama canal water route believed to have existed in Nicaragua.

The story of the first of the great global youth expeditions.  At the suggestion of HRH The Prince of Wales, a new type of enterprise took young explorers of many nations into the far corners of the earth to face challenges and dangers that turn boys into men and girls into women - and give the older staff some grey hairs in the process!

Using an airship and a splendid sailing vessel, it attracted thousands of applications.  Strongly supported by the American and British media, ABC, Survival Anglia TV and especially Capital Radio on London.

The content can be in a serious or humorous vein on exploration, expeditions, travel, leadership, team building, motivation, communication and inspiration.

The discovery of strange underwater ruins and wrecks by a large team of Royal Engineer divers off Paphos, Cyprus.

The story of one of the most famous expeditions of the twentieth century.  A team of British servicemen and scientists make the first complete exploration and navigation of the infamous rapid-strewn Blue Nile in the mountains of Ethiopia.  Supported by the Daily Telegraph and Survival Anglia TV, the voyage of discovery has been likened to a real life "Raiders of the Lost Ark".

On the centenary of Henry Morton Stanley's trans-African expedition, JBS led 160 strong international team of medical experts, biologists and soldiers to carry out scientific exploration of flora, fauna and disease of the 2,700 mile Zaire (now Congo) River. With the backing of the Daily Telegraph and Survival Anglia TV, and using special jet craft and giant inflatables, this is an epic adventure.

With magic lantern pictures used by Sir Henry Morton Stanley in his own lectures and other early images, JBS tells the incredible story of 19th century adventure and discovery. Stanley's voice from an early recording will also be played.   The lecture covers all Stanley's epic expeditions as well as the finding of Dr David Livingstone.

To mark the 200th anniversary of the birth of the famous explorer, JBS uses early images and magic lantern slides to tell the life story of this remarkable man's expeditions and his fight against slavery.

Following the success of Operation Drake, a new enterprise was launched by HRH The Prince of Wales.  The adventures of the many thousands of young venturers were only part of the story.  The real value was what they did to help the environment, wildlife and the people of the areas in which they worked; and what they did for their own communities on their return.  Widely covered by the media.

The story of the amazing rescue in 1868 of some 60 diplomats and missionaries held captive by Emperor Theodore of Abyssinia on a 9,000 foot mountain.  JBS tells of his visit to the remote site where General Sir Robert Napier's expeditionary force defeated the despotic ruler.

From the birth of whitewater rafting, over mountains and deserts, through jungle and swamp and beneath the sea, JBS takes his audience through his adventurous life, including the quest for a giant mammoth-like elephant in Nepal.  A very popular, amusing and fast-moving presentation with dramatic film and amazing archival slides, suitable for audiences of all ages.

A massive project involving fascinating archaeology and an epic adventure by traditional reed boats on the rivers of South America, to unravel some of the mysteries of the past.  Featured by the Daily Telegraph, Sunday Times, Daily Mail and BBC.

The story of the Kota Mama VI expedition seeking a giant meteorite in the Bolivian Amazonas area.  Involving the first use of paramotors on scientific exploration and the delivery of a pedal organ to a remote tribe.  Supported by The Daily Mail and featured on BBC.

An incredible story of the delivery of a grand piano to a tribe of Amerindians in a remote part of Guyana.  Supported by the Daily Mail and filmed by BBC.

For ways to contact JBS regarding booking him for a presentation or after dinner speech, please click here .